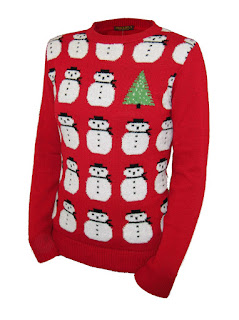 People can buy anything! The range of goods the shops are selling proves that people will probably buy anything at this time of year. There are things that you never otherwise see and items whose function seems obscure or even unnecessary. Best of all if there is something you have always wanted to buy but are too embarrassed then at this time of year your chance has come because you can just say it’s a present for someone!


The list of top ten toys! You’d like to think it’s because we are in an age of Austerity that people feel the need to indulge in food, drink and shopping so readily but before the recession, it was even worse. It was in those days that Xmas became competitive with lists of the must-have toys being promoted meaning of course that even more people must have them. These lists, supposedly based on demand, are probably created by the manufactures to stimulate demand. Children of course want what all the other children have hence the items sell out.
Technology is not helping!: The real problem now is that it is becoming more difficult to buy presents because of the way technology is gradually eradicating the options. Once, you could get people CDs and it was a fairly safe bet. Now it is so cheap and easy to download music that these sorts of items are no longer considered valuable enough to buy.  Films and tv are going the same way with books to follow. Even the option of giving cash will one day go when all transactions are virtual. Suddenly the idea of woolly hats with tassles doesn’t seem so unappealing.
City centres looking Austrian! Stalls that look like large sheds, the odour of German sausages, unlikely looking wooden penguins and frozen looking staff. This is the face of Xmas shopping 2000s style. All year long the regular shops try their best to thrive in these difficult times but when the premier shopping period begins with the potential for mega sales their exteriors are obscured and the high street starts to resemble an Austrian village.

Charity collections! Charity collectors seem to think that we will be more generous at this time of year but if you apply logic people will surely have less spare cash to give to collectors. The best time they can choose is a date when nothing is happening like, say, 22 April.

Xmas staff! These are people taken on for the period due to the anticipated rush. Turns out they are usually much more pleasant than regular staff because they don’t have to put up with us all year.

Xmas clothes! Would people really wear something as garish as bright red and white woolly hats with coloured tassles if it were not Xmas? Will jumpers depicting cartoon reindeer be worn when January dawns? Of course not. Imagine if they tried to market clothes based on other seasons like a watering can shaped hat for the summer or a dress that looks like the fading leaves on a tree. It just wouldn’t work yet if you go outside now you will see people you would least expect sporting their Crimbo wardrobe with pride. And Primark have sold out of some of them. 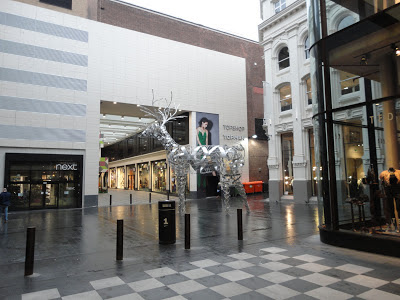 Mince Pies! Mince pies appear only at Xmas even though they are exactly the same as other fruit filled pies. Over the years they have become deeper so that now when you bite into them, the filling oozes out all over your Xmas jumper. People buy too many mince pies of course, leave them somewhere, find them in May, pull a face and throw them away. Eat them before 5 January!

Temporary ice rinks!  Another thing people like to do only during the festive season is try ice skating. With Dancing on Ice so popular, viewers tend to assume that it must be fairly easy to master if the likes of reality show contestants can manage it. Of course, it isn’t and lots of people gather around to watch skaters fall over. Lets’ face it, that is the real entertainment value of ice skating.

Pre Xmas sales!: Once the recession began shops started to change their Xmas behaviour. Sales always used to begin on Boxing Day with the pre- Xmas prices being at a premium. Then in a rush of self defeating behaviour some stores began to introduce them before Xmas Day. Now people realise this will happen so hold back on some purchases so the shops’ takings are down so they start the sales even earlier….

Glittery Xmas Cards!  2012 seems to be the worst year for Xmas cards in some time. Now that the teddy bear craze has ended we are left with the return of glitter covered cards- and this is the sort of glitter that falls off as soon as you touch the card. Maybe this is why there are predictions that this year will see the lowest number of Xmas cards sent ever.

Giant Metal Reindeer! The greatest outdoor Xmas decoration idea in years, these metallic reindeer have started appearing in most major cities’ shopping areas over the past few years. The metal framework shape is covered in small lights so it looks impressive either during the day or night. The sheer size means even the tallest can walk under them. Whoever thought of them is a Xmas genius! 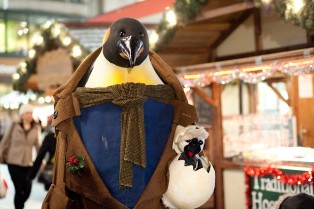