The return of Doctor Who has plenty of surprises...
It was Russell T Davies whose version of Doctor Who was heavily influenced by American television yet it is now Steven Moffat’s era that is embracing that look and feel even more. This is the first of five episodes framed like TV Movies whose purpose at least partly appears to play to non UK audiences. Big, broad scenarios, location filming in the States and Spain and a sense of spectacle are all part of this season and to emphasise the point each episode has a movie style poster to go with it. Just as the Doctor himself is seeking to go underground, so the show is trying to make more of an international splash than ever. Question is- does it work?
﻿ ﻿
After nearly fifty years you’d think there was nothing more to say about Daleks and since 2005’s modern eponymously named classic, each successive story featuring the metal meanies has disappointed one way or another. `Asylum of the Daleks` takes a different approach, largely forgetting the creatures’ increasingly labyrinthine story arc and plunging us straight into something new. Steven Moffat asks- what happens to the really, really, really bad Daleks?
Courtesy of some excellent direction from Nick Hurran, we meet them rusting in a subterranean facility but occasionally springing into life. As our heroes explore this place with low corridors redolent of the original 1960s stories, it really does feel like the series at its primal best. Being Moffat there is still time for humour amidst such a menacing locale, primarily a genuinely funny gag about the word `egg` which is so good it gets used twice and why not. Sound effects bristle, lighting blinks and shimmers while Hurran’s unhurried camera work gives a near 3D feel. Rarely has the show immersed us in such a real alien world.
As has been much publicised (and now we know why they seemed to be telling us so much was because of the things they weren’t telling us!) the range of Daleks on display encompasses all eras. It proves that you can’t mess with such a famous silhouette too much and side by side with their predecessors the new Dalek Paradigm still seemed awkwardly shaped. 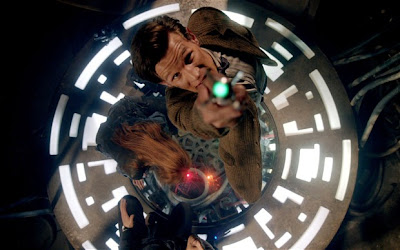 The scale of the story is huge and yet Moffat invests enough humanity in it to make us really care. The dialogue is crisp and natural, the Doctor pitched just right faced with this situation. It’s a grumpier, more serious Doctor to suit the tone but it makes a pleasant change. Moffat must surely know we’re weary of Amy and Rory’s constant near deaths and resurrections but in one beautiful scene he brings us back to these two characters and makes them as real as your next door neighbour. Both Karen Gillan and Arthur Darvill are excellent in this minute or so and it makes all the rest of the episode more complete. Yet even that won’t be the main talking point.
Cheekily- and as far as we know without so much as one media leak- new companion Oswin makes her debut in this episode. Nope, she’s not in the cast list or the pre-publicity or anything. And you do spend the first few minutes thinking’ “Doesn’t she look a lot like that new girl Jenna Louise Coleman?”. All the press has her character named as Clara and it would be typical Moffat if that is what she is called when we meet her again at Xmas. If indeed she is the same character then.
Oswin is the other human side of the story, her breezy survival ethic and chatting about soufflés a great diversion. When we find out she is actually a converted Dalek well it’s time for jaws to hit the floor. Moffat can it seems make us believe anything. Coleman also seems to make a great foil for Matt Smith, who remains as energetically urgent as ever. Even so you wonder how they are going to work her introduction and you also wonder whether her story arc will be similar to River Song’s in that we first meet her at the end or at least we know her ultimate fate. Those are questions for another time and in this episode mostly playing to off screen voices, Jenna Louise Coleman makes a confident, lively debut.
The trailer then was a bit misleading and instead of some large metallic epic, much of `Asylum` plays out in dark corners between strong characters and is all the better for it.  There seems to be a lot of content yet matters never feel too hurried or unexplained. There must be four part stories in the old series with less plot than was here. It might be that younger viewers’ attention wandered at certain moments but there are always some thrills just round the corner. At every turn the episode surprises yet there is time for exquisite and inventive detail. And Carmen. And eggs. And the Doctor skipping about the TARDIS saying “Doctor Who”! A very good soufflé by anyone’s standards.
Posted by John Connors at 19:12

Email ThisBlogThis!Share to TwitterShare to FacebookShare to Pinterest
Labels: Asylum of the Daleks, Doctor Who, TV