There’s a whole generation of singers, comedians, writers and commentators whose work has emerged online rather than through traditional channels such as record companies, publishing, live appearances or television. Yet in an odd way it is only through exposure via `old media` that they have become better known. It is weird that you can have over a million people watching your work on You Tube yet you become much more famous with a series seen by considerably less people on E4. It shows that old media is a bit like a specialist search engine scouring the most popular online entertainment and essentially carrying out the same function as say the music press used to. The Midnight Beast emerged that way and is that most risky of ventures, a comedic pop group. After building up a following on You Tube doing parodies of songs and musical styles E4 granted them a 6 part series which recently finished its run. So, is it any good? The answer –with a few reservations- is Yes! 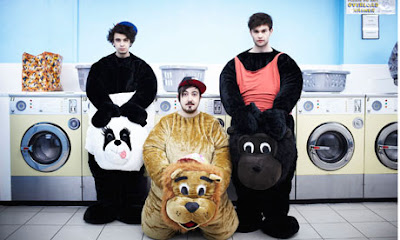 Course, the whole thing is not really aimed at someone like me. It is built with precision that is a lot less casual than it might appear to teenagers. If I were sixteen and heard or saw The Midnight Beast, it would be by new favourite thing. That’s not to say it has no appeal to older viewers; in fact at times it is super funny and quite clever too. Whether it can stretch beyond four minute clips to 23 minute episodes is something else again.
The premise is simple enough - a wannabe unsigned three piece group living in student-ish squalor writing slightly generic sounding music and becoming involved in amusing scrapes and japes. So far so North and South (you probably don’t remember them). There’s a rich history of this sort of thing going back to The Monkees and even those films where The Beatles appeared to live together while these days plenty of comedians mine the parody music area. What is key is whether the music works and luckily for TMB it really does. Their pop-rap is authentic yet not too hardcore so as to put people off and the lyrics possess a wonderfully British eye view suffused with clever comedy lines that work through the sheer speed at which they are delivered. They probably wouldn’t work if you saw them written down but they are full of energetic character.
Their best songs come on with the swagger of rap which the lyrics then undermine. `I Kicked A Shark In The Face` for example has your archetypal rapper (albeit one boasting how he has his own fridge) facing not a gang but a shark in the first verse and a bear in the second. Brilliantly, it has the shark going “rawr, rawr rawr”. And it has a middle section just so people don’t think they hate animals. `Quirky` is about individualism and you can imagine how self mythologizing a serious song on the matter would be but here TMB celebrate such odd things as drinking peppermint tea, having a beard or best of all “The other day I had a piece of toast, I didn’t even butter it, it tasted gross.”
﻿
﻿
Posted by John Connors at 19:05

Email ThisBlogThis!Share to TwitterShare to FacebookShare to Pinterest
Labels: The Midnight Beast, TV