Up -words features the best of the articles from This way up when it was published as a print fanzine from 2002- 2010.
Unquiet Slumbers / John Connors / June 2005
Martin McDonagh is notorious in literary circles for once telling Sean Connery to “Shut up, you’ve only made three good films” when the original Jamesh Bond berated him for being drunk at an awards ceremony. The son of an Irish construction worker and a cleaning lady, McDonagh left school at 16, spent ten years on the dole watching his brother attempt to become a writer before having a go himself. Eventually, the Druid Theatre Company picked up his work and he found himself acclaimed as `the most promising playwright to emerge in Britain in the last ten years`.  Plays like Beauty Queen which featured an old woman doused in chip fat, The Lonesome West where a priest put his hands into molten plastic and The Lieutenant of Inishmore in which bodies were seen being hacked up on stage have earned him a reputation as theatre lands’ Tarantino but all his work has a strong moral point to make and doesn’t mind making the audience feel uncomfortable in the process.
The Pillowman asks us to think about responsibility; is a crime justified in extreme circumstances? Is a writer morally responsible for what happens as a result of his words? At a time when theatres have twice recently been threatened with violence for staging `provocative` work, it’s certainly a timely reminder that once a drama is unleashed it is very difficult for its writer to control the results. Premiered at the National Theatre in November 2003, with a cast that included Jim Broadbent, this three month provincial tour saw The Pillowman playing to packed, enthusiastic houses even if the venues were sometimes off the beaten track. For example, sitting in the bar of the slightly surreal, ultra modern Salford Quays theatre, a few miles from the centre of Manchester, I was surprised to see a fully working barge pumping past but that was not to be my only unusual sight of the evening. 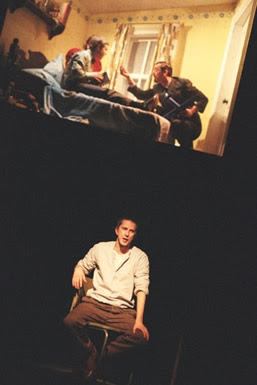 In an unnamed autocratic dictatorship, a young writer called Katurian finds himself in police custody but has no idea why. Is it perhaps because of his macabre short stories in which children meet grisly fates yet always at the behest of a moral? The Pillowman asks us to think about responsibility; is a crime justified in extreme circumstances? Is a writer morally responsible for what happens as a result of his words? At a time when theatres have twice recently been threatened with violence for staging `provocative` work, it’s certainly a timely reminder that once a drama is unleashed it is very difficult for its writer to control the results. Premiered at the National Theatre in November 2003, with a cast that included Jim Broadbent, this three month provincial tour saw The Pillowman playing to packed, enthusiastic houses even if the venues were sometimes off the beaten track. For example, sitting in the bar of the slightly surreal, ultra modern Salford Quays theatre, a few miles from the centre of Manchester, I was surprised to see a fully working barge pumping past but that was not to be my only unusual sight of the evening.
Not for the faint hearted but no bloodbath either, The Pillowman is a dextrous work that manages to amuse as much as it does to shock yet there is a bitter undertow that might make you wonder what sort of nightmares McDonagh himself endures. Grimmer than the grimmest Grimm fairytale Katurian’s stories are the amazing backbone of the play (see boxout) and it is the reading of them that does the spade work in getting to grips with Katurian himself. Through a story called `The Writer and the Writer’s Brother` we learn that the Katurian brothers endured a bizarre childhood. While Katurian was given everything and treated with love and care, Michal was locked in his room and tortured nightly with electrodes. His screams and the sounds of the torture turned his younger brother’s prose and themes darker by the day. After seven years of this he investigated, discovered the truth and promptly killed his parents, smothering them with a pillow. Thus the motif of pillows is established and it is this very same fate that awaits Michal later albeit in different circumstances.
Then there is `The Pillowman` story itself; in this tale, a man made entirely of pillows visits adults about to commit suicide, slows time and re-visits them in their childhood, telling them what will become of them and offering to kill them off now.
Its difficult to see if there is a lot of logic in the circuitous turn of events that the play depicts – on the one hand can any writer really be held responsible for the effects their words have on unstable individuals? Can Katurian’s murder of his parents ever really be justified whatever the circumstances? McDonagh doesn’t make it easy because he challenges the arguments from both sides. He dares us, on the one hand, to feel empathy with the brothers who are surely victims themselves. Yet on the other hand, his settings are so theatrically gothic and in some ways so absurd that it’s hard not to search for a deeper allegory at work. 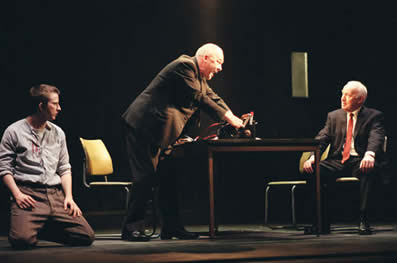 The way he wrong foots our expectations makes for a rollercoaster evening though. At first it seems as if he is showing a typical old style Iron Curtain state at work; the shifty glances between the policemen, the air of mystery and subterfuge, the ambiguous questions that confuse rather than clarify - it all brings to mind the former USSR. Once the true nature of the investigation is established, the emphasis shifts to a debate about the influence of Katurian’s stories. Once Michal is added to the mix, we are duped into believing he couldn’t possibly do it; at one point Katurian even suggests there may not have been any murdered children at all and it’s all a stitch up. Then when Michal casually admits he did commit the murders, the play turns into a brotherly two hander for half an hour, full of poignant moments and real anger. You kind of know what’s coming when Katurian lulls Michal to sleep with his favourite story but it doesn’t make it any less shocking. That leaves the last part as a cat and mouse game between both detectives and Katurian.
Another powerful force at work is McDonagh’s feisty dialogue, twisting and turning from brutal threats to casual sarcasm at the drop of a hat. Right from the start this is evident when Katurian tries to show how much he respects the police and that his work has no political agenda that he thinks they think it might have (the play is full of delightfully threaded sentences like that!). He can’t believe he’s actually in trouble, “I’m helping you with your enquiries, I thought” he offers, suggesting they are not friends but neither are they enemies. Ariel, the more aggressive detective counters; “You’ve had your rights read. You’ve been took out of your home, You’ve had a fucking blindfold on. Do you think we do this to our good fucking friends?” Throughout the interrogation Ariel and his subordinate Tupolski exchange some frustration with each other, which adds another humorous undercurrent; early on Tuploski sardonically points out they are bad and good cop. The policemen start to identify the theme of murdered children in Katurian’s work.
Once his brother Michal is mentioned, casually, as being held in the next room, Katurian becomes more agitated especially as Tupolski starts to question the minutiae of his stories trying to identify motivations and themes. It’s as if the policeman is enjoying the intellectual exercise and the writer is defending it on a purely literary level. Of one Katurian declares, “It’s a puzzle without a solution” to which Tupolski says, “I think there’s a solution. But then, I’m really clever.” The dialogue is interrupted when simultaneously the sound of Michal screaming drifts into the room and Tuploski demands Katurian looks inside a metal box he produces. Katurian is bewildered that his brother is being hurt, “You said you wouldn’t touch him” he pleads prompting Tupolski’s smart reply; “I haven’t touched him”. Katurian: “But you said he would be fine. You gave me your word.” Tupolski: “I am a high ranking police officer in a totalitarian fucking dictatorship. What are you doing taking my word about anything?”
The dramatic tension is upped by now; the box seems to contain five toes, allegedly pertaining to a story of Katurian’s and it is revealed that Michal has confessed to three child murders. After a flashback depiction of Katurian’s background as described above, Act two sees Katurian, after being beaten up, thrown into the same cell as Michal who has actually not been beaten up. This is a brilliantly composed and lengthy scene during which we find out that Michal has committed the murders, which shatters and horrifies Katurian especially when Michal intimates that the missing third child has been despatched in the fashion of `The Little Jesus`.
Initially we are led to believe that Michal really is incapable of anything bad; he simple mindedly tells Katurian he’s bored and he also swears that he didn’t kill the kids. Katurian starts to doubt whether any crimes have really taken place; “We don’t even know that there were any children killed at all” he tells Michal, just because they’ve been told about it doesn’t necessarily make it true. This is when Michal gets Katurian to relate `The Pillowman` story to him, at the end of which Michal says; “but I still can’t figure it out”; Katurian thinks he’s talking about the story but then – and this is the moment the play really starts to get dark – Michal says; “The box with the little boy’s toes in it.”