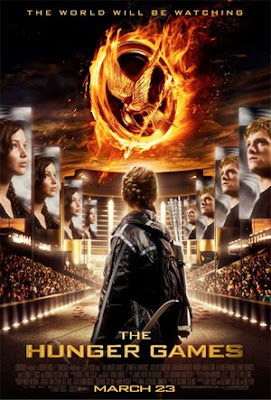 
Side stepping the issue of why they choose children rather than adults (the answer is probably because it’s adapted from a children’s novel) the focus of the story is Katniss Everdeen from District 12 who volunteers to be a Tribute in place of her younger sister .A somewhat surly character, she is initially cast in the mould of most children’s book heroes- the loner who has no friends- but this is broadened out making her a much more nuanced and interesting character than, for example, Harry Potter or the Narnia kids.
It isn’t clear where her principles come from or why she is far less reluctant than the other participants to butcher anyone she can but this slowly turns around so that by the end you wonder what is so wrong with the others. Katniss’s responses to what happens to her seem increasingly plausible even though we never find out why she thinks so differently and thanks to a stellar performance by Jennifer Lawrence we `get` her quite soon. What is impressive is the fact that Katniss scores little victories and even at the end when she makes a shocking decision it does not seem to change the status quo. As revolutions go, its effect is no more than an irritated bristling of Donald Sutherland’s presidential beard.
If Katniss is a very down to earth character then the others we meet are less so and come across as caricatures; indeed their appearance resembles those Victorian sketches. The movie portrays the elite as foppish dandies dressed to the nines (or in some case the tens!) and stuffing their faces with food. They lap up the Games, seemingly not caring about the slaughter on screen. There are painfully accurate digs at sports commentators, officialdom and even the morality of kids in what is a surprisingly dark film at times. One scene that shocks is when the Tributes are let loose in the engineered forest environment where they will fight and within moments half of them have been skewered and sliced by the others. Not having read the book, I don’t know how this is handled there but it is a disturbing image for viewers of any age.
Director Gary Ross ensures a surprising 12A certificate by smart cuts and edits, though this only intensifies the primal brutality in the fight scenes. They punctuate what looks at times like a small indie film with hand held cameras, pauses and meaningful looks. There are scene stealing appearances from the likes of Woody Harrelson’s grouchy mentor Haymitch Abernathy and especially Stanley Tucci who’s a riot as blue haired presenter Ceaser Flickman.  As the other District 12 Tribute Peeta Mellark, Josh Hutcherson is excellent in a role that is just as complex as Katniss’ but with less screen time; their scenes together are well written and played. We learn little about the other Tributes so the film’s most moving scene when one of them dies and Katniss gives her a proper memorial works because of the way Ross leaps straight to what the event causes. It’s the first hint that not all the people watching are without feeling. 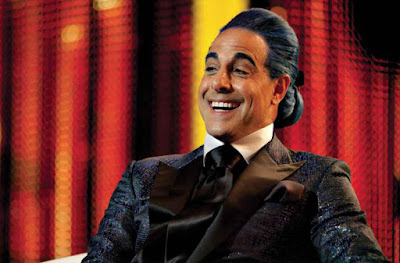 Sometimes the visuals can feel too literal; the poor Districts are shot with sepia toned nostalgia, the inhabitants resembling the frugality of the Amish. The cities contain every sci-fi staple you can imagine though the pre Games rituals and even the chariot ridden introductions of the Tributes to large crowds have the air of the Roman amphitheatre about them. The scale is impressively spectacular- and one unexpected moment has a real wow factor - but Ross also makes sure we stay as close to Katniss as possible so we can feel her disorientation at events. As mentioned, the violence is sharp and brutal and if you don’t like wasps or large nasty dogs you might find a couple of the sequences hard to watch.
The post- Potter age of children’s book adaptations has not been doing so well of late but The Hunger Games has real edge and a sense that it speaks about issues that affect us all. This is the first part of a trilogy and this shows at the inconclusive end but the fact that you want to know what happens next is a sure sign that it’s got us hooked. Hopefully we’ll get to find out.
Posted by John Connors at 16:00