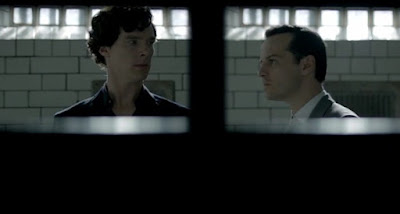 
Moriarty is back in a big way. He masterminds a triptych of simultaneous crimes in which nothing it stolen but ends with his arrest leading to a trial at which he says nothing, offering no defence. This is merely a prelude to his determination to bring Sherlock down. Again the clever title- the reference to the recovery of a painting that makes Sherlock a national celebrity- and our foreknowledge of the basics of the story add a fizzling tension. Thompson turns the story- in part - into an examination of how celebrity will distort, confuse and finally burn, how in the end you can only trust your friends. Moriarty’s plan seems at times random and petty, almost like a bored child- just as Sherlock was bored in last week’s episode- yet it suddenly pulls together with some bolts that even the most avid watcher will not have spotted coming out of the blue.
It’s Moriarty’s episode of course allowing Andrew Scott full reign –well he does don the crown jewels in a hilariously narcissistic moment- as he takes the skill of screen villainy to new levels of absurdity. Scott is tremendous throughout, whether taunting Sherlock in their magnetic encounters or sometimes saying absolutely nothing. During the trial he expresses himself through grimaces alone. Afterwards, director Toby Haynes- splendid throughout- has the two in adjacent cells unable to see each other but knowing the other is there. When Moriarty shows up as `Richard Brook` in the episode’s second greatest unexpected turn Scott is so convincing we begin to think the whole scenario is true.
Like a wounded animal determined to retain his dignity and by no means defeated Benedict Cumberbatch is able to take Sherlock to a new dimension, showing vulnerability and even concern, often by the subtlest alteration of tone or look. The remarkable thing about his performances in this role- and the way it is written- is how this Holmes would work in his normal time period as well as the present day.
Where the series has made the greatest changes to the Holmes we are familiar with from previous films or TV is in the way Sherlock and Watson interact. It’s a portrayal of friendship, loyalty and respect that many modern dramas don’t go near. The episodes often acknowledge this with jibes about the nature of their relationship suggesting a lot of us think in a `tabloid` way nowadays even if we don’t read them. Martin Freeman is arguably what glues the series and in particular this episode together- he is the everyman struggling to make sense of the extraordinarily clever duo swirling around him. It would have been easy to have made the character rather stupid but this Watson is not unintelligent, neither is he intimidated by Sherlock’s knowledge, perhaps why they are friends. Thompson’s fluid script floats around this friendship leading us to the conclusion that it will be John who will save the day. 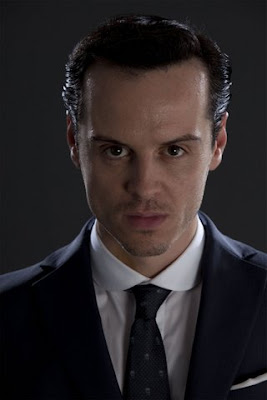 The rooftop confrontation between Holmes and Moriarty is one we don’t really want to end- you could watch these two trying to outsmart each other for hours but it concludes in a manner that shocks even for this most unpredictable show. It’s fitting that the end should be wrapped up in a puzzle – how exactly does Sherlock pull off the trick of appearing to fall to his death in front of our eyes- or perhaps crucially in front of John’s eyes – and then be glimpsed watching the aftermath of his own funeral apparently unscathed.
We may not find out for 18 months or two years given the busy schedules of the main participants but the theory we’re going with at TWU Towers- this having been cobbled together by several people- is that Sherlock actually fell into a lorry packed with boxes that would break his fall. That cyclist who knocked Watson over was no passing fluke, but one of Sherlock’s homeless brigade who in the melee administered some of that mind altering drug from last week’s episode.

We subsequently see matters from Watson’s perspective- the Sherlock mask and coat has been placed on Moriarty’s body so as far as Watson is concerned it is his friend. The mask was something surely used by Moriarty when kidnapping the child- hence she screamed when she saw Sherlock. It’s not specifically mentioned but seems likely. After this, Mycroft will arrange the rest to ensure Sherlock is officially deceased. The mask can soon be removed so that Moriarty can be seen to be buried- he won’t be back we reckon, which is a pity but of course by then Andrew Scott should have his own series of something or other.
Whatever it turns out to be- and let’s face it they don’t have the sort of easy options of a shape shifting robot or a time travelling device- it’s difficult to remember the ending of a TV series evoking such energetic debate for many a year. `The Reichenbach Fall` is a thrilling ending to an exhilarating trio of episodes that will surely be remembered as some of the best TV drama of this decade.
Words: John Connors 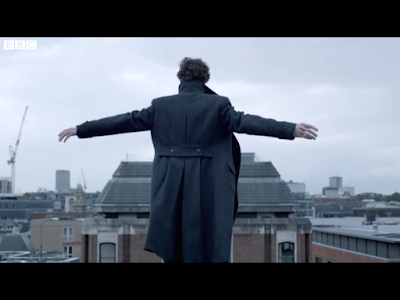