Doctor Who fans have been divided over the character of River Song but it might be they who were on Steven Moffat’s mind when he created her. This week he’s been speaking out against spoilers and whilst it’s reasonable to support his views he should perhaps be cautious about what he wishes for.


There have always been fan spoilers of course. In the old days visitors to the production office would try to glimpse clues lying about- John Nathan Turner famously wrote fake story titles on the notice board to see if they were leaked, which of course they were. This week’s episode title `The Doctor’s Wife` originated in this way, though it’s not known if Neil Gaiman knew this when writing it. Or perhaps he was the fan who saw it!
Television Centre had viewing galleries to which fans invited in could see filming, though as these were located above the studio lights what could be viewed was limited. There was a screen in each gallery as well, though this would sometimes show the camera pointed at the floor. The fact is that however much information got out it rarely reached the national press and if it had they wouldn’t have been interested unless it was something salacious. It’s impossible to imagine the Daily Mirror of 1982 trumpeting the front page news “World Exclusive- the Cybermen are back!” with a page 6 sub story- “But no Vogans (boo)!” By and large spoilers stayed within fandom and travelled as slowly as phone calls and paper fanzines allowed.
.
Nowadays we live in a different media world where news outlets and entertainment websites are actively seeking anything to fuel our 24 hours news culture while Doctor Who is also much bigger news than it was even at its 1970s’ peak. Fans haven’t changed though, with a proportion of them determined to weasel out every morsel of advance information for whatever reason. Of course it is now easy to transmit this information everywhere; all it takes is a post or a tweet and the world knows about it. And so does the media.
For a series like Doctor Who, particularly the current incarnation which thrives on complex knotty arc plots, this practice is robbing the storytelling of its surprises. Nobody can really think that reading a spoiler synopsis is better than watching the episode, surely? Moffat quite rightly criticised the fan that went to the press screening of this year’s first 2 episodes and despite everyone there being asked not to, promptly revealed the entire plot online.

However, the rest of us at least had the option not to look at it. In the weeks leading up to transmission many surprises in those episodes were revealed to us courtesy of trailers- some on as late as 10pm- which we could barely avoid without lightning fast remote control responses. They do it all the time, sometimes as blatantly as the `Radio Times` cover from a few years back showing a cliff-hanger reveal before it was broadcast! The officially sanctioned `Doctor Who Magazine` got in on the act this year with a cover based on the fact that one of the regulars would die which was published well before `The Impossible Astronaut` was broadcast. Just seeing that headline makes you subsequently watch the episode differently than you would without having seen it.
Think how amazing that would have been if all we’d seen was the original enigmatic trailer of just the astronaut’s visor reflecting the Doctor’s face. Surely enough to whet the appetite and intrigue? As it was, most of us spent the weeks leading up to transmission speculating which character would perish and that makes the way you approach the episode different. It’s not the way- surely- the writer intended?
Steven Moffat could be accused of wanting things both ways. He’s happy with the pre-publicity he decides is enough to tease us- and sometimes even this gives too much away- but not when people take it on their own head to reveal more. Most of the `spoilers` do it out of love for the series, though not much love for the people who create it or the rest of us who just want to watch it and be amazed.
Steven Moffat may be on to a loser though with his argument because our TV and film culture now thrives on trailers, teasers and especially spoilers but these are aspects you can only go so far with. Or one day people won’t bother watching things at all. 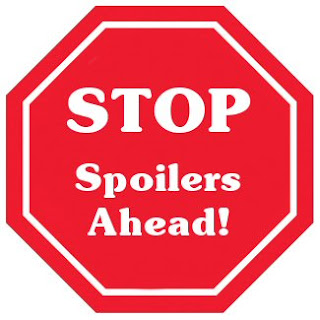 The reason why Steven Moffat’s comments have caused such a stir is because to a large extent television channels encourage our culture of spoilers. How many episodes of ongoing series now conclude with a `Next Week` segment? Most of them do. Often these give away revelations or answer questions posed in this week’s episode that (some) viewers might like to have not known till next week. For any fans of soap operas, the situation is ludicrous- weeks before a big storyline or character revelation, the details are available in every media outlet. You barely need to watch the programmes to have an idea of what is going on in them.
Posted by John Connors at 19:11