Three Is The Magic Number by John Connors 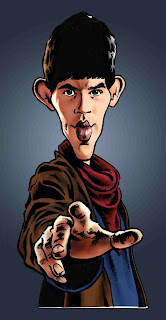 Dealing with a pre-existing legend can be a blessing and a curse for writers. On the one hand you want to retain the familiar icons, on the other why bother if you’re not going to impart something fresh? Merlin sits deftly between these two aspects managing to feel new yet familiar at once. The third season is bolder than its predecessors, more fluid in its themes and confident in their delivery. From the energetic two part opener to the thrilling finale it reaps the rewards of what has sometimes seemed like too careful an approach. On reflection we can definitely see a three year game plan that pays off in every department. Perhaps the most surprising thing- though those of us who’ve watched since the start shouldn’t be too surprised- is how well it has done in the ratings. Latter season three episodes were getting 6 to 7 million viewers despite being scheduled against The X Factor. You suspect even Simon Cowell might raise an eyebrow over that.

This season was obviously written with an eye on the series’ probable cancellation as the lack of `Radio Times` coverage and teaser trailers makes it seem as if the BBC had it in their heads that this would be the last season. However even they will have been surprised by the ratings and thankfully the show is coming back, though possibly not until next year. When its return was announced it was stated it will be 10 rather than 13 episodes, a decision made by the producers when given the option of only having same budget next time and wanting to maintain the very high visual standard. Latterly it’s been reported season 4 will consist of 13 episodes after all.

Arthur must journey to the Perilous Lands for his Quest in Eye of the Phoenix, which takes its cue from the Fisher King legend. Visually this is a treat with some washed out vistas and a terrific set of monsters in the Wyvern. The Fisher King is played by Donald Sumpter an actor whose haunted face and serious tone is tailor made for this sort of thing. The action is interspersed with Gwen’s discovery of Morgana’s true intent which actually turns out to be more involving than the main plot. The trouble with Quests is that the involve a lot of wandering about so it’s not really till the Dark Tower that things kick off and then it all seems a little too contrived.

Love in the Time of Dragons pitches romanticism with nastiness rather well. Gaius’ former fiancée Alice (played by Pauline Collins) is back in the castle for a touching reunion but is being controlled by a Manticore. This is one of the best monsters the show has done, a horribly twisted human-ish face with spiky teeth on the body of a lion with the tail of a scorpion. It may only be the size of a Jack Russell but it is terrifying! The script touches on Uther’s hypocrisy and also on the choices made in the heat of danger. Colin Morgan and Richard Wilson’s on screen chemistry benefits the scenario- when they fall out it seems real plus the ending is played perfectly. One question though. Does that librarian sit at his desk 24 hours a day?

Queen of Hearts is an  odd episode in which Howard Overman’s script flips from serious to light in a moment. Morgana is at her most duplicitous, manipulating Arthur and Gwen into a secret rendezvous, persuading Uther to go on a ride that then discovers them and then planting evidence that Gwen has bewitched the prince with magic. Uther predictably decides to have her burned at the stake on this somewhat flimsy evidence. Presumably unemployment in Camelot is kept low by the turnover in the king’s staff! To rescue her, Merlin ages up and here is where things alter from being a grim, melodrama into a run-around as Colin Morgan has fun being cranky and ancient. It’s his episode really, and it’s good that Merlin gets to say what he really thinks of Uther, even if he is in disguise.
Fun though it is, the change is so sudden it does remove the peril; we’re never in any doubt that Gwen will be saved and the way it is done is rather too neat. Uther’s anti-magic stance is being used too often as a plot prop and by now you’d imagine he’d be having second thoughts or at least doubts about his methods. In continuing to make him the unreconstructed bigot, the scripts are undermining Uther. Some episodes he is more than that, yet for a series that has moved away from the weekly reset button and is developing it’s themes, Uther regresses to season one mould too often. Nonetheless, Gawaine is back to liven up the fighting and Arthur’s weary tolerance of both him and Merlin when they show up to help is a high spot. The weakest element though is Morgana’s bracelet, supposed to drain the prince of his power so he fails the Quest. It is so large, chunky and obviously glowing malevolently that even someone like Arthur would surely notice? Matters are redeemed by a splendid meeting between the Fisher King and Merlin that foreshadows what’s to come.
There’s another tournament afoot in The Sorcerer’s Shadow but thankfully the episode turns into a personal dilemma for Merlin. The inexperienced Gilly uses magic to win his way through the tournament gaining in confidence and continually ignoring Merlin’s advice to withdraw. The script is strong in outlining both character’s point of view- Gilly feels sorcerers need to stop hiding and when he has the opportunity to fight Uther wants to take it. Merlin counters this by saying that one day they will be free to do so but it is dangerous to expose his talents now. The parallels with any suppressed minority are plain enough and there’s no new insight but Merlin is not challenged enough in this way so the script is a winner. There’s  also a good secondary plot involving Uther’s involvement in the event that provides a dilemma for Arthur.  His choice- he throws the fight – is acknowledged by Uther as proving he is ready to be king, though of course we know it was a choice made at Merlin’s suggestion. Something of a Trojan horse of an episode, this proves to be one of the season’s stand outs not least because of Colin Morgan’s impassioned acting and Tony Head’s subtleties in balancing his role.
﻿
After a satisfying build of the arc plot involving Morgana, expectations are high for the final 2 part story The Coming of Arthur and it does not disappoint though some interesting choices are made. Having already done epic battles at the start of the season, the mood conjured now is more one of impending doom mixed with a piecing together of some of the key elements of the Arthurian legend. We re-discover the sword in the lake, several characters return to help out and are knighted by Arthur and in the old castle where they hide out uncover the round table. Meanwhile Morgana’s plans come to fruition courtesy of the Cup of Life with which Morgeuse has created a seemingly invincible army. There is therefore a huge amount of material to get through and yet matters never seem rushed. Each character has a key part to play and while there are some small scale hand to hand combat scenes, attention is paid to the characters rather than to simply being epic for the sake of it.

That’s not to say the episodes don’t have their grandiose moments, particularly some superbly rendered shots of the huge army on its way to Camelot. It could be from a film, it looks that good. The only slight niggle is the ending which denies us a faceoff between Morgana and Merlin though that is something to look forward to. The story also shows how Merlin has matured and become more pro-active while retaining his secret.

If this had been the last story, it is a fitting way to end, as it is, there is enough potential here for several more seasons as Merlin ended 2010 as a show more popular than before.
Posted by John Connors at 19:46