BEST OF THIS WAY UP book

Articles, features and episode guides from the archives of the acclaimed fanzine/ blog This Way Up are collected together in a unique volume. 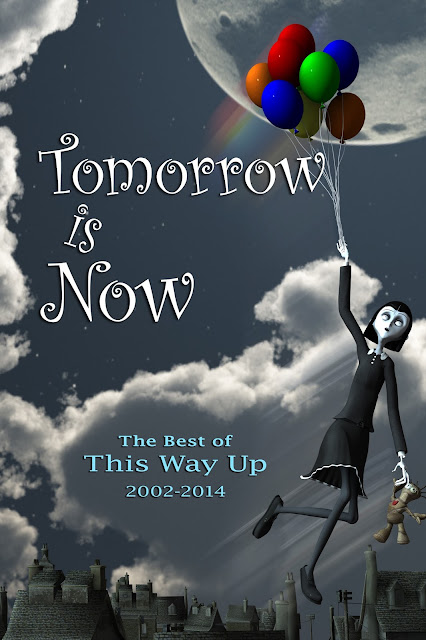 After 12 years, 29 separate issues and over 450 blog posts it seems a good time to present a compilation of thiswayup. When the zine started back in 2002 a number of writers contributed some great material all of which has been out of print for a while, so this book is intended to bring the best articles together and make them available to both a new and old audience.
Obviously there are omissions because of a huge amount of articles and features to choose from when you think every issue was at least 40 pages long and some were longer. One early decision was not to include any of the Doctor Who articles saving them instead for a separate project.  Another was to exclude the long music articles we did during the earlier years of the zine. This is because most of the artists we covered already have detailed biographies available so we would be overlapping.
Much better I thought was to include the sort of things few others have written let alone published books about as well as a selection of pieces that received a lot of good feedback at the time.  My credit for editing is probably generous as it simply involved reading through everything to change any spelling or grammatical errors that slipped through first time round. A handful of articles were re-worked slightly at the request of the writer but in most cases the context of the articles is the same as when first published, inaccurate predictions and all! Of course what has not changed is the programmes, films or events being discussed so I don’t think there is a lot that you could call out of date. The book includes a range spanning from the first issue published in March 2002 to an item posted on this blog last month!
The other reason for doing this book now is that the blog has inevitably evolved. It is a different medium from printed fanzines and as time has gone on so thiswayup has become comfortable in this new skin. Most of it is now written by me- though hopefully others will contribute from time to time- and the style has moved to shorter posts suited to the blog format. I do sometimes think of changing the name or starting a different blog to reflect the changes but it has a certain `known` quantity to it so I have so far resisted. Plus I can’t really think of another name!
Though by no means finished, the fanzine market has shrunk and it is so much easier, when you’re busy in other aspects of life, to post some views on a blog than go through the more detailed process of developing and writing a full scale article. I do miss the fanzine medium in one way but I don’t miss the process that comes before publication – the endless chasing up for articles, the typing, layout and then the printers and worst of all the mailing out process.
I am very proud of what the paper issues published and pleased that at least some of it is now available for the foreseeable future.  As the book title says, tomorrow is now.
Happy reading!
John Connors (11/08/14)