Doctor Who- Terror of the Autons@50

“I am usually referred to as The Master”. With just eight words a new classic tv villain made his debut appearance fifty years ago yet nobody could know just how defining a performance Roger Delgado would give and how enduring the character would become. The Master has re-appeared in many guises over the subsequent half century yet the benchmarks are all laid out from the start. Generously afforded the role of (increasingly un-surprising) enemy in each of 1971’s stories enabled both character and actor to develop a popularity to rival that of the Doctor. Yet there was nothing complicated about The Master really. Clad in black and sporting a Mephistophelian trimmed beard the only way he could look more evil would be to sprout a couple of horns. In another actor’s hands it could have been unimpressive but gifted a role he was totally suited to Roger Delgado makes it his own. So much so that every Master since has used it as a template either to copy or develop. As an example of how in thrall the Eighties version of Doctor Who was to its past when they recast the part they made the actor look as similar as possible to Delgado. Nowadays writers like to pry into the psyche of the main characters but this version of the series never went too deep. They didn’t need to. The Doctor versus The Master is clear good versus evil and kids at that time were happy with such escapist adventure. 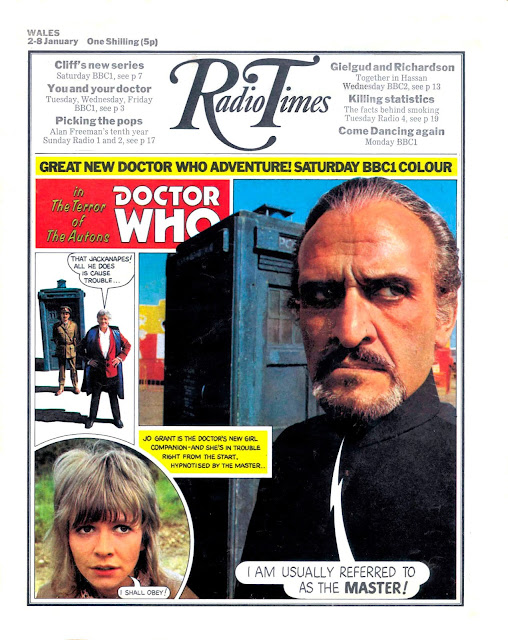 His introduction is classic and shows the intelligent confidence of The Master who has bothered to find out Lew Russell’s name and can snap his finger wearing leather gloves! Throughout the story the actor gives a poised performance hinting at the tumult under the surface. Yet ultimately the results flatter to deceive. For all Roger Delgado’s personal charisma, The Master turns out to be exactly the sort of `plodder` that the Doctor describes him as. The story is threaded through with filler material in which that jackanapes tries various methods to despatch our hero, each of them foiled by coincidental intervention from another character. Why does he bother doing this when it detracts from the main plan. My favourite of these is that he has persuaded the Nestenes to leave an Auton in the walk- in safe at the factory office! All this drives the story into a tight corner from which it is extracted by two lines of dialogue in which the Doctor `convinces` the Master that the Nestenes would get rid of him too. In a story awash with conveniences this is the least believable of the lot. Viewers in 1971 probably never noticed such is the magnetism of Delgado’s performance. In that sense he had everyone hypnotised!

The Master’s prominence surely inspired Jon Pertwee to up his game. The third incarnation had his moments in season seven but had yet to really establish his persona in what were very dense stories packed with characters. In this season he is moved front and centre playing into the actor’s action man image and it results in a very satisfying performance. Compared to most Doctors past and present, Pertwee’s version seems the least alien, the most human. In a later story he is seen scoffing cheese and wine in a country house and looks more like he lives there than is a stranded alien. There is little of the eccentricity that say Patrick Troughton or Tom Baker brought yet there is a homely, protective vibe that kids would enjoy from a tv hero.  Meanwhile Katy Manning begins what would be a great three year run as Jo Grant who despite being called "a ham fisted bun vendor" in her first encounter with the Doctor would prove to be just what the show needed. 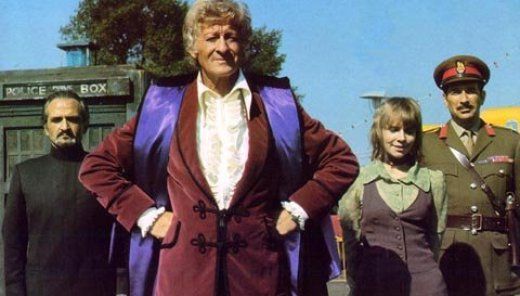 This story is the blueprint for a simpler version of Doctor Who, a primary colours based game of Good versus Evil. The Doctor’s test tube tinkering of 1970 is replaced by more cape swirling action, he now has a companion who needs protecting and a villain who is his polar opposite. This approach opens up storytelling options as the previous season was already looking repetitive despite only comprising four stories. From hereon the stories are simpler, more action oriented and eye bruisingly colourful. It was left to regular writer Robert Holmes to give this new version an edge and cut through any cosiness. Like a John Lennon to Terrance Dicks’ Paul McCartney, Holmes ensured Doctor Who never quite became safe. Here blank faced policemen, killer sofas and daffodils that spit a suffocating film ensured `Terror` lived up to it’s name.

All that being said when you watch the story it comes over as being a series of set pieces linked by a thin narrative. The introduction of both Jo and The Master is achieved more successfully than the other elements which seem designed to show off Holmes’ macabre ideas. The Autons’ popularity ensured their return but other than those new ways of despatching victims, Holmes didn’t really have much idea what to do with them. Like a lot of Doctor Who antagonists there is only enough mileage in them for one adventure.

On the other hand you have to admire the way these set pieces are imagined. Barry Letts directed but due to BBC rules couldn’t be credited though he should be for the way he helms the story’s signature moments using techniques that are clearly aimed to shock the viewer’s senses.  MacDermott’s squelchy demise in the deadly embrace of a plastic chair is chilling though as a design the very low seat looks uncomfortable even before it starts to kill you! The doll thing is one of the most horrific monsters the series has had. There’s a superbly choreographed sequence in a quarry with the Auton policemen and a well known stunt when one of them falls down a steep hill. Plus there’s one of those smoke festooned UNIT battles beloved of this era of the show and they’ve made the explosions look more real this year instead of the orange flashpots of last. And don’t they just love that trampoline effect. Never mind the elephants, the real circus is out on the battlefield where soldiers fly backwards and forwards

Meanwhile, UNIT appear to have moved closer to the less glamorous end of the Thames and had a bit of an interior makeover. The Doctor’s lab is an eclectic mixture of scientific equipment, sash windows, brick walls painted white and an odd collection of curios dotted about the room. During the course of the story I spotted some black and white prints, a traditional hat stand, two crossed African spears, a carved wooden chair and most bizarrely a model of a fish dangling from the ceiling. Their security on the other hand has not improved as they loaned out the remaining Nestene globe to an exhibition contained in a box with the letters UNIT stencilled on the outside. Plus the Master gets in twice, once disguised as a telephone engineer with a pass and later as himself. It reminded me that in later stories we see a great big UNIT sign outside their HQ, so much for being a secret organisation! 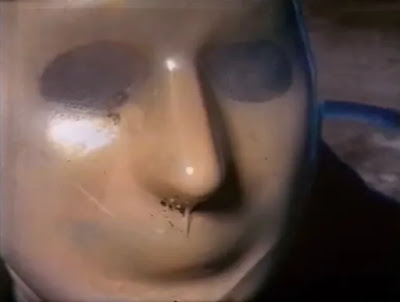 Even so the UNIT set up shows a lot of promise which really does possess the dynamics of a family. You’ve got the parents- the Doctor and the Brigadier- who quarrel but mean well and the three kids- Jo, Mike and Benton.  It is in this season that the Doctor’s curious attitude is established. From his ruffled velvet clothes to his superior air he often behaves like a Duke yet his impassioned speeches for the planet, the environment and human life are those of a liberal. Here he obviously knows big government cheese Tubby Rowlands and is not above shameless name dropping yet his confrontational way can hamper rather than hasten co-operation. The story’s best unseen character is that “dolly Scotsman” as Jo describes him, Campbell, from scientific stores. All the way through parts 3 and 4 I imagined him on the phone pleading with his suppliers for shortened delivery times while they were offering excuses as to why this was not possible. The Doctor doesn’t seem to realise the paperwork he is generating.

Elsewhere the story tries to sketch some light background (I don’t mean the CSO kitchen lol) with the Farrell family and even some asides between Jo and Mike. Interviews with Barry Letts make it clear that taking the characters down a `soap` road was never an option which is a shame but it just wasn’t the way episodic tv was done back then. There is definitely enough chemistry between Jo and Mike here that could have been pursued further though I suppose not all the subsequent stories had as thin a plot as this one does.  For a story designed to bring back the popular Autons they are a sideshow and apart from the final stand off in front of the coach there is little Auton action. Instead the focus is on their latest lethal gadgets. Yet ultimately these are diversions to pad out the running time and give free reign to Robert Holmes’ dark imagination.

The story would have worked better unwrapped from the inside without the early warning as to who The Master was. The horsebox Tardis sound gives it away even before we have an appearance from an inscrutable Time Lord. Surely the mystery of this new antagonist deserved a better build up with the reveal of his origins coming during a part four confrontation. “You don’t see it do you Doctor? I am like you, I am a Time Lord!” People would have spilt their cuppas! And what if the Master’s intention was never to side with the Nestenes but lure them to Earth to get rid of the Doctor. “You see Doctor I never expected them to spare me because they will not be here any longer than it takes to get rid of you. The Earth will then be mine for the picking.” Now that’s a cunning plan.