We continue on this journey that is so big it wouldn't fit on one post!!
As 1986 drew to a close, things were changing. Tony was leaving partly because he was applying for a job abroad but also due to an incident at an earlier Exec meeting. He’d been on holiday and there had been a discussion on his progress as co-ordinator raising a few criticisms which seemed pointless. The same thing had happened to me the previous meeting; it is annoying to read these things in minutes later possibly out of context of the breadth of the discussion. Tony was in- censed and decided to leave at the end of the year. He had originally planned to stay till the following September. Incidentally, it was from this incident that Dominic acquired the nickname Slimy. Having actually started the discussion, Dominic then wrote a letter in the Exec circular withdrawing his comments.

There was another cloud on the horizon too; something that reflected the success the DWAS was enjoying at this time. It seemed that we’d been doing so well that the DWAS would be liable for VAT which is paid on turn over (not profit). The opposite to the problems of mid-1985, in fact. It was subsequently alleged that we tried to brush the VAT problem under the carpet, but in fact we sought out people with a legal background to help out. This led to Andrew Beech being appointed co-ordinator from January 1987. By the end of 1986 Nick had moved on from being LGs Assistant to be replaced by Phil Akiens someone we both knew from the Leicester Local Group. However the LG Circular he produced did not meet the standards we needed and there were criticisms from both the Exec and groups. Unfortunately I had to tell Phil that he couldn’t carry on in the role  It was one of the most difficult decisions I ever had to make on the Exec. To try and find someone who would be able to produce the circular to a high standard I turned to Andy Cull, the Brighton local group organiser. Though I’d never met him in person I’d seen Andy’s vibrant newsletters for his group and knew he was a good artist and graphics person and thankfully he accepted the challenge. I later found out his views on local groups were broadly similar to mine so he became someone I could swap ideas with as well, In these primitive days it was all done by letter- we only met about twice the whole time!

(left) Andy Cull. He was a great support when the Exec's attitude towards local groups changed. 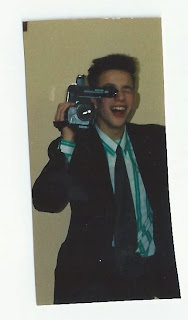 (left) Tom Robin behind the camera at an East Kent event


(right below) Tom R and me at Panopticon 87. The thing I’m pointing at his head is an actual prop gun from `Terror of the Vervoids` or the banana gun as we dubbed it which one of his group bought at the auction. Tom’s a lovely guy and I felt guilty over the way he never got the chance to bring his organisational (and filming!) skills to a national fan level. We lost touch after I left; hope he’s having a good life somewhere. 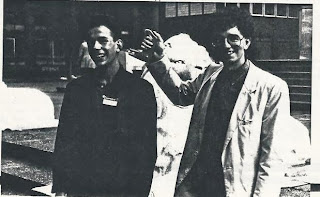 My ultimate walking into the cave of The Great One moment happened in August. The last independent Bulletin included a rumour that Ian Levine had been raided by police looking for illegal videos, something being widely discussed amongst fandom. At a very early hour one Saturday morning he phoned me up (I wonder who gave him my number?) and lectured me for some time about all he'd done for the programme. However he also said he would be content with an apology in the next Bulletin. Andrew decided to tell everyone that Levine was planning to sue me and on the basis of this, and without asking for any comment from me, I was suspended pending a special meeting. Whereas the internal travails of the exec rarely made it to the pages of CT, Brian J Robb decided this deserved it's very own tabloid style story which - ironically- included a libellous comment in it claiming erroneously that Levine had threatened legal action against me which he had not. 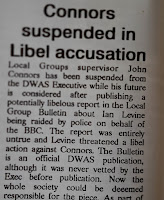 The suspension ended up running for 7 weeks because once it became clear that Levine in fact would rather not be linked to public intra Exec strife Beechy would have to contrive something else. You're probably asking- well after all that why not just give up and walk away? A valid question and looking back I realise the answer is that basically both myself and Andrew Beech are stubborn Northerners who would never do that. It wasn't just that- I felt rightly or wrongly I was standing up for the DWAS that was rather than his vision of the boring DWAS.
In October 1988 I attended my last Exec meeting. I was cleared over the Levine issue and back in tandem for about an hour. Then it was decided to introduce a new system where each Exec member looked after several groups. The LG Supervisor post would be downgraded to assistant level- reporting to the editor of CT. You see what they did there! As if that whole idea would work (which incidentally it didn't), as if I would really want to work with an idiot like Brian J Robb or indeed the rest of the exec. Incidentally while all this was going on they also got rid of the Writers Pool without ceremony; this had been a part of the DWAS since the late 70s. Even at the end of this meeting I was subjected to some crap from Peter Lovelady who feigned concern over the way I'd been treated. When I left I threw all the stuff from the meeting into the nearest waste paper bin where is deserved to go.
Some local groups - despite the lies about me they'd been told- had left the DWAS or were planning to and I found myself in discussions about a potential new organisation called Network Who. However this fledgling idea got rather ahead of itself and I discovered flyers and suchlike had been sent out with my name on them. I realised then that I didn't have the enthusiasm to be part of such a project and the January 1989 CT saw a statement by me to that effect. In hindsight it was a rather disingenuous statement in which I seem to deny even knowing about it which was not true but at that moment I just had to get out.

Life went on and it’s amazing to think all of this happened the best part of 25 years ago. This article was originally written in 1990 for issue 1 of `Purple Haze` but going through it again to re-edit has reminded me of lots of things I’d forgotten about. My memories of this period nowadays are mostly good and I am satisfied that while there were mistakes I generally did a good job. I do however find it difficult to understand how  all of us managed to put all that energy and effort into something that seems quite trivial now. I suppose we were young and foolish!
There is a nice postscript to all this too. In 1996 Neil Hutchings and I attended the DWAS twentieth anniversary event and I met the people looking after local groups then and found out they’d been around when I was doing the job. What’s more they had revived the Local Groups Bulletin and were very complimentary about what I had done back in the day. To me that was the best thing of all to discover. We all want to be liked in the end, don’t we?


Next Time: Project X, The new wave of Doctor Who Fanzines and Top