What a flapdoodle! Its Doctor Who’s 50th birthday this month and everyone’s doing something to celebrate the fact but what is there really left to do? Every story, episode, scene, line has been analysed well beyond the nth degree and my keyboard refuses to type words like “classic”, “gritty” and “era” any longer. Besides everyone else will be doing that anyway. Instead I thought I’d take a personal look at stuff I’ve done relating to being a fan of Doctor Who. Well stuff that can be reproduced without maximum embarrassment and shame at least. I’ve called it John’s Doctor Who Fanbook.

So I had a rummage and found items that would inspire me to write a bit about aspects of my experiences of being a Doctor Who fan. The first thing I noticed was how little I have kept. I know of some people who still have wrapped Doctor Who confectionary from decades ago. I ate mine. I know people who’ve collected every edition of DWM, every video, every DVD and every rolykin, whatever the jiggins a rolykin might be. I threw mine out at some time. I don’t even have that many photos though judging from the ones I do have that might be a good thing as you’ll see. This started off as a bit of fun but as I looked through all these things, looked at old photos and re-read old fanzines I started to feel incredibly nostalgic and I normally dislike nostalgia. So the only thing to do was to let it out for once and for all.

I present this series with unashamed joy that whatever I was doing I had a good time doing it even if now I can’t begin to understand what the attraction was. It’s like how people think of someone they used to go out with and go “How did I ever fancy them?” It must have meant something at the time - and that’s what celebrations are all about! 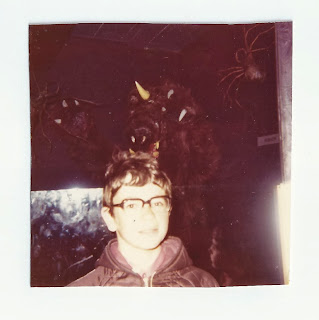 What an embarrassing start! This is me when Aggedor came round to our house during a power cut. Or it might be me at the Blackpool Doctor Who Exhibition in the 1970s. That place was the closest fans got to the show in those days of one watch telly. The family used to go there each year and after feigning interest in other Blackpoolery, I was just waiting to get into that Exhibition and see the monsters for real. You went in through a large TARDIS shaped exterior, down a steep flight of steps and onto a springy carpet. Pay your money and advance into a darkened passageway beyond which lay the world of Doctor Who.  No other Exhibition since has quite managed to match this one with its stage lighting, endless sound effects, clips and monster tableaux. 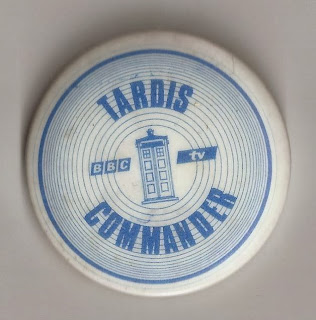 This was an official BBC badge you could get in the 1970s and a source of great pride at the time even if I now have no idea what a TARDIS Commander might do. As I kept it all this time it must be something important. I keep thinking I might get a mysterious phone call to tell me; “All TARDIS Commanders are required. Stand by for temporal action.” Well it would be a change from someone calling me about home insulation. 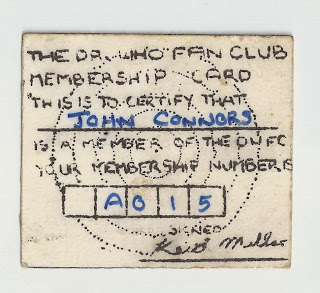 This was my Doctor Who Fan Club (DWFC) membership card. The history of the DWFC is very well documented in Keith Miller’s excellent two books published recently. For the isolated fan in Liverpool the club was perfect even though looking back it was flimsy but it was a connection of sorts to other fans. The first thing I ever had published in a fanzine was in the DWFC fanzine. It was a drawing of a Sensorite. Of course I had no idea what a Sensorite did but when I’d seen a photo it looked amazing. When Keith’s book was published it was a surprise to learn he’d only been a teenager when running the club because I had imagined him to be really old! 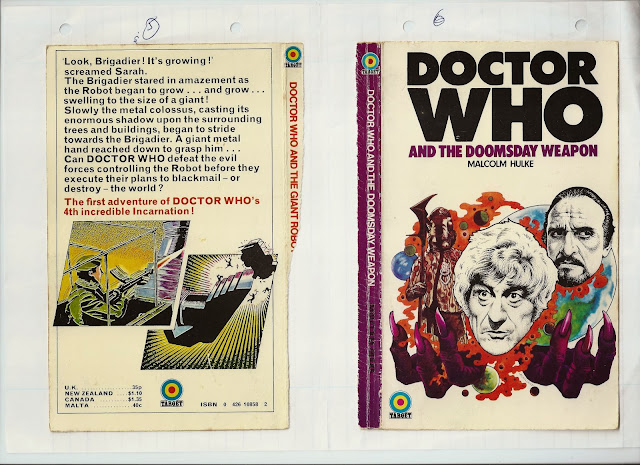 Every few weeks I’d rush to our nearby branch of WH Smith (which is still there amazingly), upstairs to their books department to pick up the latest Target novelisation. These books were our only way of re-living Doctor Who before home video / TV Gold /DVD / downloads and many of them are great examples of children’s fiction in their own right. Plus each time you bought one there was a tempting list of forthcoming titles. Once older stories were novelised it was our only chance to discover what 1960s stories had been like as well as being a permanent record of the latest stories which at the time we never imagined we’d see again. The flipside is that these wonderful books did rather overlook the production standards of old stories. Hence the incredible scenarios described in `The Web Planet` book are replaced by something rather less impressive when you finally see the story. 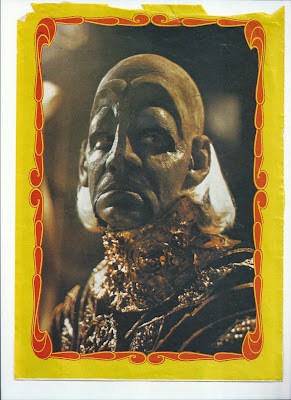 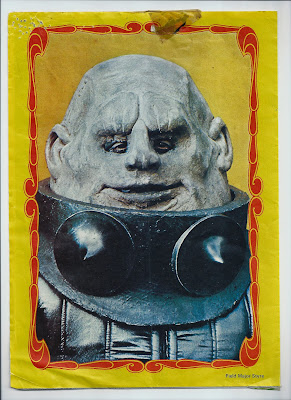 Today kids have posters of Girls Aloud or One Direction. In the 1970s we had Styre and Vorus! Yes,  both these posters were actually on my bedroom wall. Yes they were. Vorus looks like he’s smelt something particularly disgusting while Styre looks very smug with himself having obviously just won a battle. I don’t think either of them did a signing in HMV though. There wasn’t much of this sort of thing about though in those days. Before Doctor Who Magazine there were only occasional photo mags. If only there was an ambitious appreciation society for the show somewhere out there…..

Next Time: Joining the DWAS, encountering fan politics, writing for fanzines and my first ever convention.

Email ThisBlogThis!Share to TwitterShare to FacebookShare to Pinterest
Labels: Doctor Who, Doctor Who fandom, John's Doctor Who Fanbook